The objective is to provide you a brief description and essential aspects of the anatomy of female and male reproductive systems, normal menstrual cycle and the events that lead to normal conception

The Female reproductive system is basically divided into external and internal genitalia. External Genitalia Mons pubis It is the pad of flat-lying in front of the pubic bone which is normally covered by hair following puberty. In females the distribution of hair is triangular. Labia majora They are two elongated folds of fat (adipose tissue) covered by skin projecting downwards and backward from the Mons pubis. After repeated childbearing, they become less prominent and in old age, they begin to shrivel. Following puberty, they are covered with hair and have a rich supply of sebaceous glands. Labia minora Theonare the two thin folds of skin one each side, just within the labia majora. They are seen only when the labia majora are separated. There are no hair follicles but plenty of sebaceous follicles and sweat glands. 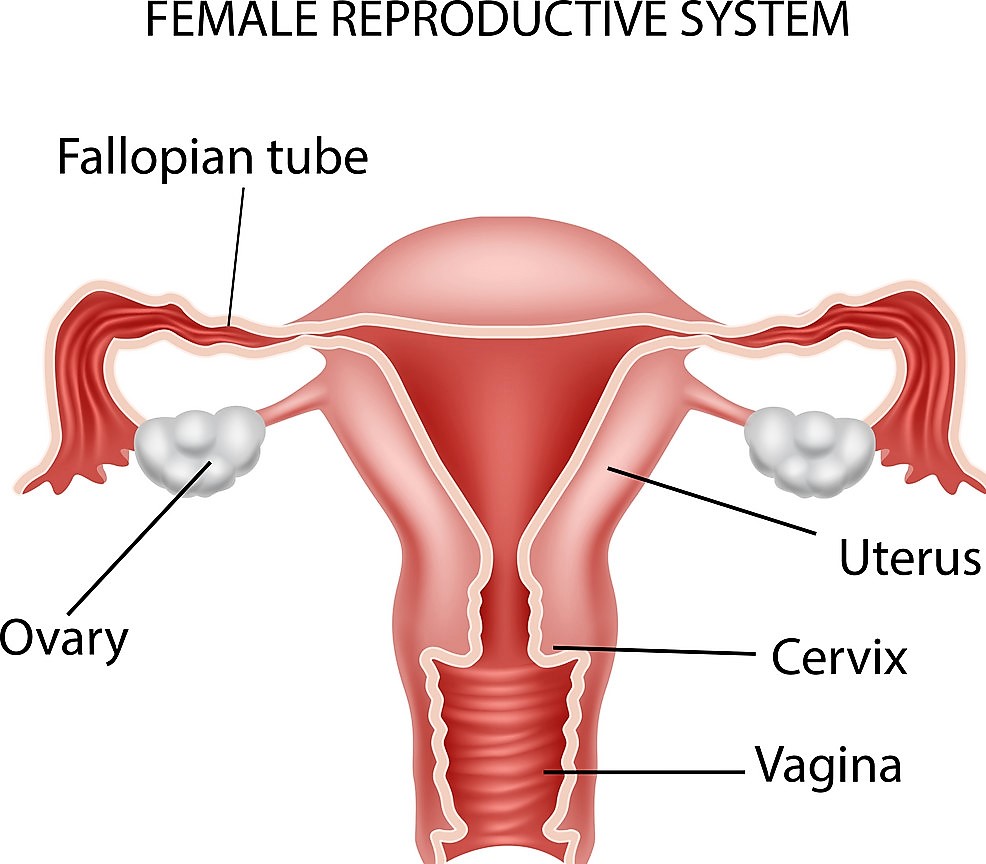 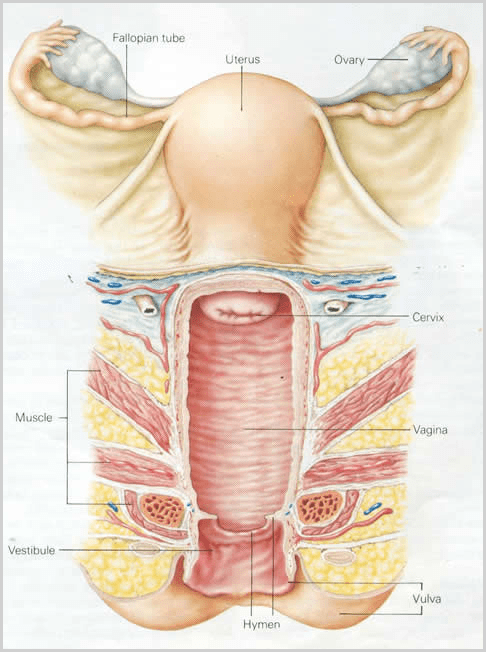 This is the highly excitable erectile tissue in the female corresponding to the penis of the male and is situated in the most anterior portion of the vulva and projects between the two folds of labia minora.

This is an incomplete septum of the mucous membrane which closes the vaginal orifice. The hymen is usually ruptured at the first coitus and its intact presence or absence is not necessarily a sign of virginity.

This is the triangular surface which is bounded anteriorly by the clitoris, laterally by the labia minora and posteriorly by the anterior margin of the hymen. The vestibule is perforBartholin’s openings-urethra, vagina, ducts of the bartholin’s glands, paraurethral glands and ducts of skene glands.

This opening lies in the middle of the vestibule and it’s lower two-thirds lies immediately above the anterior vaginal wall. This the external communication of the urinary bladder.

This is a muscular canal which serves as a connection between the vulval region and the internal organ-the uterus. It is through this same canal that sexual intercourse takes place as also the birth canal for the delivery of the baby. This is situated between the bladder in front and the rectum behind. The cervix i.e. the mouth of the uterus dips onto the vaginal canal.

This is otherwise known as the neck of the uterus. It forms a conical projection from the lower end of the uterus into the upper part of the vagina. It has two communications-the internal os which opens into the lower segment of the uterus and the external os which opens into the vagina The cervix has cervical glands that secrete the mucous-like fluid which becomes thin and favorable at the time of ovulation to facilitate the easy passage of motile sperms. During the other times, the cervix has thick secretion which does not allow the sperms to penetrate. The cervix has an important role to play in infertility.

This is a hollow muscular organ situated deep within the pelvis. It is the most important organ since it shelters the baby and also sheds its endometrium (which is the inner lining layer of the uterus) during monthly periods. It has important ligamentary support anchoring it in the pelvic cavity, in a normal position of ante flexion and ante version.

The fallopian tubes are attached at its superior and lateral ends known as the cornua. This communication is essential for the passage of the fertilized embryo to embed itself in the uterine cavity. The size of the uterus varies widely measuring only 2.5-3.5 cm prior to puberty and in the adult nulliparous woman (one who has not borne children) it measures 6-8cm in length as compared to the multiparous (one who has borne children). It weighs about 50-70gm.During pregnancy it undergoes remarkable growth due to enlargement of its muscle fibers, increasing in weight from 70gm to 1100gm. The shape of its cavity is normally triangular and it’s lower end is tapered to form the fusiform cervical canal with small apertures known as internal and external os, After menopause the size of the uterus decreases as a consequence of atrophy of both the muscular layer (myometrium) and the endometrium.

The uterus derives a rich blood supply from the uterine and ovarian arteries. Abnormalities arising due to congenital causes are discussed further on.

These are two long thin tubes arising from sides of the uterus measuring about 10-12 cm. The lateral ends of the tubes are stretched out into finger like processes called fimbriae which lie near the ovaries. This serves as the most vital communication between the uterine cavity and the ovary and the fimbrial ends help in picking up the released eggs from the ovaries during the normal process of ovulation. It is through a normal passage in this tube that the fertilized embryo travels to reach the uterine cavity for implantation.

Any infections or abnormal kinking of these tubes may lead to blockage in the normal communication which is of great medical significance.

These are the two almond shaped structures which are situated on either side of the uterus (next to the fimbriae). The ovary is the one that produces the ovum or the egg every month during a normal menstrual cycle. This process is greatly influenced by hormones secreted by higher centers and also within the ovary itself. During the childbearing years they are 2.5-5cm in length, 1.5-3cm in breadth and 0.6-1.5cm in thickness, After menopause they decrease in size. It is connected by the utero-ovarian ligaments to the uterus just below the fallopian tubes. It derives it’s blood supply from the ovarian plexus. Abnormalities in ovulation are discussed later. 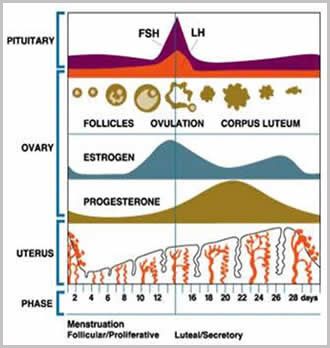 Physiology of the female menstrual/estrous cycle

Menstruation is the cyclical discharge of blood, mucous and cellular debris from the uterine lining. The time of onset of the first period is termed as menarche. This cyclical (28-30 days) monthly process is by and large regular and predictable right from menarche until menopause except during pregnancy, lactation, anovulation or interference with medication. The highest incidence of anovulatory cycles is under age 20 and over age 40. At age 25, over 40% of cycles are between 25 and 28 days in length; from 25 to 35, over 60% are between 25 and 28 days. What is the mechanism behind this cyclical shedding and what are the hormones involved? To understand this better it is worthwhile to divide the monthly cycle into 4 phases, namely:

FSH
Follicular Stimulating Hormone – Causes growth of follicles in the ovaries prior to ovulation and promotes the formation of sperm in the testes.
LH
Leutinizing Hormone – Plays an important role in causing ovulation and also promotes secretion of female sex hormones by the ovaries and testosterone by the testes.
HCG
Human Chorionic Gonadotrophin – Promotes growth of the corpus luteum and secretion of estrogen and progesterone by the same.
Estrogen
(Estradiol) – Stimulates the development, of female sex organs, the breasts and other secondary sexual characteristics.
Progesterone
(Progestin) – Stimulates secretion by uterine endometrial glands in preparation for implantation, otherwise known as Decidual reaction. It also helps to promote the development of the secretory apparatus of breasts.
The regulation of the menstrual cycle is due to the normal integrated functioning of the hypothalamo-pituitary-ovarian-axis. The hypothalamus and the pituitary are situated in the human brain and effect the production of releasing hormones which induce the end organ – ovaries to release the primary female hormones namely estrogen and progesterone. This is called positive feedback. When the levels of these hormones have reached an adequate level to perform their respective functions, they suppress the releasing effect in the brain. This is called negative feedback.

Penis
This is the main organ involved in the sexual union with the female. It is a long cylindrical structure, soft and elastic arising from the pubic arch. The end of the organ is called the glans penis which is conical in shape and contains the opening of the urethra. The skin over the penis is delicate and elastic and hairless except at the base. The skin covering the glans is called prepuce. The latter is removed in circumcision leaving the glans exposed. This organ during sexual excitement gets engorged and erectile.

Scrotum
This consists of a pendulous sac, with rugose skin and encloses the testes and their associated ducts and the lower part of the spermatic cord.

There are two testes placed external to the body in the scrotal sac. They are oval in shape. Each normal testis has a volume of 15ml or more and should measure around 5cms in length. The seminiferous tubules are highly coiled structures that are located within the testis in which sperm production takes place. In-between these tubules are located the Leydig cells which produce the male hormone called testosterone. Sometimes the testis does not descend into the scrotum which may lead to subfertility. Besides these, there are several other causes ranging from infections to surgical conditions which may also contribute significantly to male factor infertility. 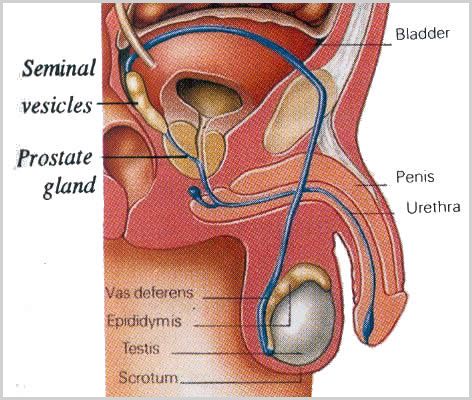 The sperms are produced by the stem cells (spermatogonia) in the testis and they are under the control of the above mentioned hormones namely Leutinising hormone (LH), Follicle Stimulating hormone (FSH) and Testosterone. The testosterone is produced by the leydig cells in the intercellular substance of the testis. The LH controls the testosterone production. The sertoli cells form supporting cells and elaborate a binding protein. The hypothalamo-pituitary-testicular axis is functional here as well. The release of LH stimulates testosterone production which in turn promotes sperm formation (spermatogenesis). FSH stimulates sertoli cells which in turn ensures a steady supply of the testosterone to the stem cells.

The union of the egg and sperm is the essence of reproduction. The fertilizable lifespan of the human egg ranges from 12-24 hours while that of the sperm ranges from 48-72 hours. The release of a mature and healthy egg from the ovary, in the mid-cycle, along with timed intercourse results in the upward passage of healthy and motile sperms through the female genital tract. The sperms break through the cervical mucous barrier and reach the fallopian tubes within minutes, but only a few hundred sperms or less reach the egg. The egg reaches the ampullary portion of the tube within 2-3 minutes after ovulation. Both the egg and sperms undergo final maturation process within the female genital tract before a single naturally selected sperm penetrates the zona (outer shell of the egg) to fertilize it. This is followed by a secondary reaction in the zona whereby further penetration of other sperms is blocked. After fertilization, there are different cellular stages marked by multiplication resulting in a final ball of cells called the morula. It is at this stage that the entry into the uterine cavity occurs for implantation and further differentiation. Shortly after its entry into the uterine cavity, the morula becomes a blastocyst, and in about 3 days time it implants itself into the endometrium. 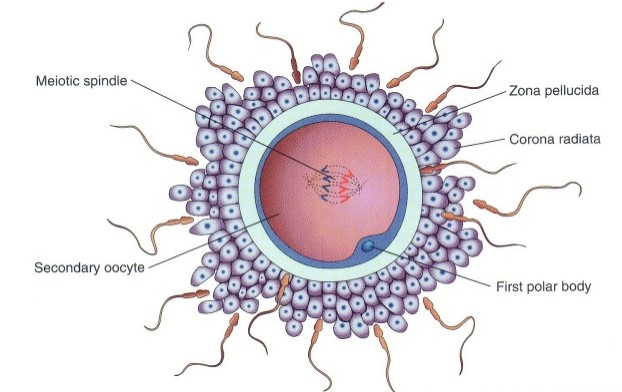 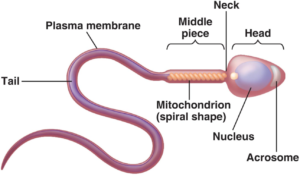 It is the process by which an embryo attaches itself to the uterine wall and penetrates first the epithelium and then the maternal circulation to form the placenta. It is roughly around the 18th or 19th day of the menstrual cycle. There are a number of favorable chemotactic agents elaborated by both the endometrium and the embryo conducive for implantation. This is a major area of research which may open up new ideas regarding the optimum support that needs to be given in order to prevent implantation failure. 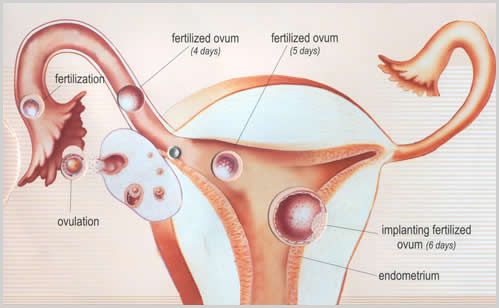